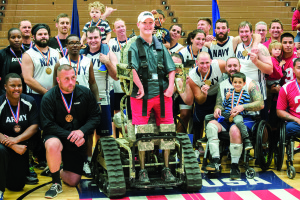 Mary Kemper
Staff Writer
His home sits atop Sugarloaf Mountain, Clermont, at the majestic height of 320 feet above sea level, the tallest in the Florida peninsula.
And the home sits right on a road well traversed by cyclists from all over the state — including a lot of veterans from the Space and Treasure Coasts.
Back in 2000, retired Air Force Lt. Col. Harry Fenstad, who flew F-4 fighter jets in Vietnam, began building his home, and in 2002, he and his wife, Janice, moved in.
Though “only” 320 feet, the mountain is still a steep climb for cyclists, and there are long distances before and after the Fenstad home where no water can be found.
“By the time they got to the top, they were pretty thirsty,” Fenstad said. “So we started running a drinking water hose out. Then it progressed to an Igloo by the side of the road.”
Many of the thousands of cyclists who rode through wanted to give money to Fenstad, but he refused. In 2005, though, he changed his mind, thinking he could turn that money back around toward helping other veterans.
Since 2005, a variety of groups have been helped by Fenstad’s generosity.
“I put out a container to collect the funds, and the first one (to receive donations) was the Wounded Warrior Project,” he said. “I collected between $5,000 and $8,000.