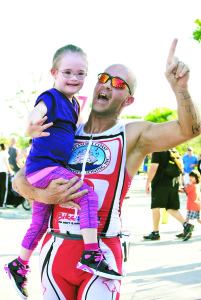 Photo by Maria Isabel
Port St. Lucie Marine Corps and triathlon veteran Chris Bertorelli holds his niece after the first Chasing Caterpillars Triathlon, Feb. 2014. The organizer, Vietnam veteran Jerry Kyckelhahn, of Palm City, has written a book to help older folks go from couch potato to triathletes. The next Chasing Caterpillars will be on Feb. 21, 2016, in Stuart.

Patrick McCallister
For Veteran Voice
Vietnam veteran Jerry Kyckelhahn is organizing the second Chasing Caterpillars Triathlon to benefit the Treasure Coast Down syndrome Awareness Group. He said it’s a great place for tri-newbies to get experience at a USA Triathlon sanctioned event.
“The Chasing Caterpillars Triathlon is a swimming-pool based triathlon,” he said. “It’s the only swimming-pool based one for adults in the area.” Triathlons do ocean swims, which are harder because of currents. Plus, some folks just don’t like jumping into the ocean. There’s another huge plus to using the swimming pool at Sailfish Splash, 931 S.E. Ruhnke St., Stuart, for the triathlon, people will get to cheer triathletes.
“There’s bleachers for the spectators to see the pool and see them run to get on their bikes,” Kyckelhahn said.
After a 250-meter swim, the triathletes will bike 10 miles and run 5 kilometers, a tad more than 3 miles. It’s called a sprint triathlon. Kyckelhahn said the bike ride and run will pass the water park several times, giving spectators several chances to rattle the cattle bells.