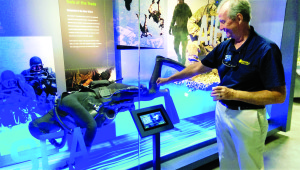 Staff photo by Patrick McCallister
Andy Brady, community outreach director of the National Navy UDT-SEAL Museum, shows one of the new displays. The Fort Pierce museum opened a $2.2 million expansion in April. This was the museum’s third expansion. The first was in 1992. The second was in 2012. The museum is working on an about $8 million expansion and eyeing an annex at the Naval Amphibious Base Coronado, Calif.

Patrick McCallister
For Veteran Voice
The National Navy UDT-SEAL Museum opened its recent $2.2 million expansion in April.
That is to say it added bunches of new interactive displays to the 13,500 square feet of indoor exhibit area, along with some pretty cool stuff outside.
Folks seem to be liking it.
“We’ve been very solid,” Rick Kaiser, executive director, said. “Normally the summer is our down time, but we’ve doubled our (visitor) numbers since last summer.”
Visitors have to pass the new Navy SEAL Children’s Obstacle Course to get inside. Yeah, don’t let the name fool you. This obstacle course modeled after the Basic Underwater Demolition/SEAL training course in California gives adults a challenge. Many visitors are unable to resist trying at least a few of the obstacles.
Heading inside, a SEAL Delivery Vehicle greets visitors. The submersible floods when underwater, allowing SEALs to covertly enter areas where they like to go unnoticed. The submersible can be opened underwater without creating a large air bubble.