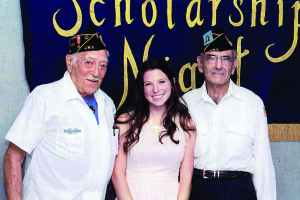 Mary Kemper
Staff Writer
As veterans’ groups go, Jewish War Veterans Post 549, Palm City, is pretty small — “You can count the number of us on two hands,” said Jerry Shapiro, Palm City, an Army veteran of World War II.
The post’s main activity is catering and hosting monthly lunches for hospital-bound veterans in the VA Medical Center at West Palm Beach.
“I feel morally and honor-bound to give back to these veterans, since I was lucky enough to come back in one piece,” said Shapiro, who is a past commander and current vice commander of the post.
But another activity involves helping one lucky Martin County high school senior each year to receive a $1,500 scholarship. Now in its fifth year, the program has helped four “tremendously outstanding” students pay toward their college bills, according to Army Korean War veteran Harvey Toback, also of Palm City, who is the post’s treasurer/quartermaster and chairman of the Scholarship Committee.