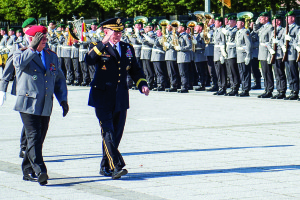 Department of Defense photo by D. Myles Cullen
U.S. Army Gen. Martin E. Dempsey, chairman of the Joint Chiefs of Staff, and German Army Gen. Volker Wieker, Germany’s chief of defense, salute during a German honor guard ceremony at the Ministry of Defense in Berlin, Sept. 10. In a meeting during Dempsey’s visit, he and Wieker discussed the refugee crisis in Europe.

Lisa Ferdinando
FOR VETERAN VOICE
The chairman of the Joint Chiefs of Staff and his German counterpart met here Sept. 10, with the refugee crisis in Europe a focus of the discussions.
After today’s talks with Gen. Volker Wieker, the chief of staff of the German armed forces, U.S. Army Gen. Martin E. Dempsey noted that the “very complex” issue also will be a subject of NATO meetings later this week in Istanbul.
The chairman said he and Wieker discussed whether NATO should have a role in addressing the cause of the crisis.
Dempsey, who spoke to reporters after his meeting, said the refugee crisis stems from instability in the Middle East, Afghanistan and North Africa, and economic conditions in the Balkans.
Earlier this week, Germany said it expects to take in 800,000 refugees this year from Africa, Afghanistan, Syria and the Balkans.
To Read More Subscribe Here