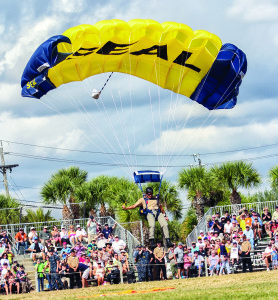 File photo Mitch Kloorfain/chief photographer
Navy SEAL ret Rick Kaiser, executive director of the UDT Navy Seal Museum in Fort Pierce took part in annual Muster by joining in on the precision parachutist display before switching hats to his role as host and emcee of the event Saturday, Nov. 9 in Fort Pierce.

Patrick McCallister
For Veteran Voice
The big booms are back. SEALs, it turns out, are party animals.
The 30th annual Navy SEAL Muster & Music Festival will be Nov. 6 to 8 at the National Navy UDT-SEAL Museum, 3300 North Highway A1A, North Hutchinson Island, Fort Pierce.
“Thirty years ago they opened the Navy SEAL Museum, and we’re going to have a big celebration,” Rick Kaiser, executive director, said.
The museum opened on Veterans Day, 1985. To put that in perspective, Ronald Reagan was President, the “Miami Vice” theme song was on top of the Billboard charts, and gasoline was about $1.10 a gallon. Oh, yeah, and Coca-Cola introduced New Coke round about the time the SEAL Museum opened. That lasted less than three months before Classic Coke hit the shelves again.
Muster events kick off on Friday, Nov. 6, with the Museum Happy Hour at the Budweiser Mobile Bar. The mobile bar is a tractor trailer with party amenities.
“It has TV screens and all that,” Kaiser said.
But folks won’t be watching TV. There’ll be plenty of SEALs around to talk to, along with the American Rouges playing their unique American Celtic music, complete with Great Highland bagpipes and electric guitars.