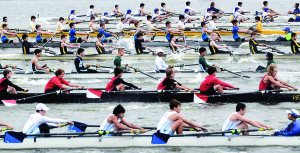 Patrick McCallister
For Veteran Voice
Tolly Allen is making waves in on the Treasure Coast that are reaching across the country. Allen, an Army veteran and former crew coach at the United States Military Academy at West Point, is the men’s coach for the Treasure Coast Rowing Club in Palm City.
“I’m definitely losing money (coaching), but it’s something I gladly pay,” he said.
Allen started crew in high school. Unlike individual sports, such as track and field, rowing forces teamwork. But, unlike team sports, such as basketball, the encouraging words and handshaking don’t come immediately after a great play. In fact, teammates probably don’t even see most of the great plays. They just know they’re happening.
“It’s a team sport, but you really have to do it alone, and have faith your team mates are doing it alone,” he said.
Allen said he’s aiming to see more veterans do two things: get fit and contribute to their communities.
“Get the (expletive) out there,” Allen said.