Brevard Stand Down ready to go 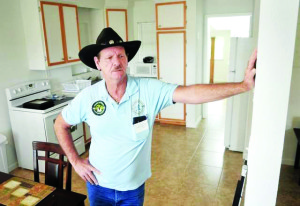 Patrick McCallister
For Veteran Voice
The National Veterans Homeless Support, NVHS, is having its seventh annual Stand Down for Homeless Veterans of Brevard, Seminole and Orange counties on Saturday, Oct. 3, from 8 a.m. to 3 p.m.
The stand down will give homeless veterans a chance to get medical, dental, legal and other assistance, along with haircuts, toiletries, clothing, and, most importantly, help with getting Department of Veterans Affairs benefits, along with help getting employment.
“In 1989, I was a homeless veteran,” George Taylor, founder, president and CEO of NVHS, said.
Taylor said he didn’t fit many of the stereotypes about homelessness. He wasn’t lazy. He wasn’t anti-social. He was stone sober.
“I wasn’t homeless because of drugs and alcohol,” he said. “I was homeless because of (post-traumatic stress disorder).”