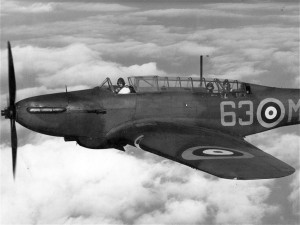 Source: Wikimedia Commons
The Fairey Battle light bomber. The plane was flown through June 1940, after which it was deemed obsolete and dangerous.

Mary Kemper
Staff Writer
He had a quirky sense of humor, twinkling blue eyes and an abiding love of tennis. Just another elderly British citizen, enjoying the autumn of life — or so I thought.
His name was Rupert Charles Langridge Parkhouse, and he was a prisoner of war (POW) during World War II — at the famous Stalag Luft III, which became the model for the movie “The Great Escape.” I didn’t know this at the time I met him in London. I wish I had.
He and my dad had met at the U.S. Army War College in Carlisle, Pennsylvania, after World War II. Royal Air Force Squadron Leader Parkhouse was there on an exchange program, and he and Dad hit it off right away.
Over the course of years, they developed and maintained a strong friendship that lasted until both of their deaths.
And over the years, Rupert told my dad his extraordinary story.