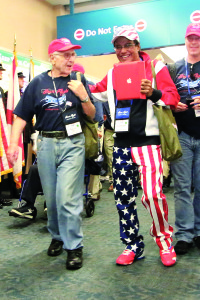 Mary Kemper
Staff Writer
A couple of months ago, Southeast Florida Honor Flight was facing a crisis — its major sponsor had to withdraw its contribution to the $65,000 cost of transporting World War II veterans to Washington, D.C., to visit national memorials and enjoy some well-deserved recognition.
Dr. Shamsher Singh, a Port St. Lucie physician and longtime supporter of Honor Flight, leaped into action. He made the rounds of city and county councils, contacted regional media (including Veteran Voice) and took a huge personal step — he offered to match $10,000 worth of donations.
Singh was quickly followed by World War II veteran Max Houss, who added his own $10,000 to the challenge.
The next flight is slated for Oct. 24. When Veteran Voice interviewed Singh, the outlook for making it to $65,000 wasn’t good, even with Singh and Houss’s challenge.
With a little more than two weeks to go, something amazing has happened.