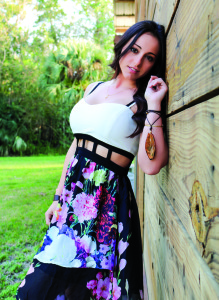 Photo courtesy Melissa Crable Photography
Singer/songwriter JessLee, a graduate of Martin County High School, will perform at the Vero Beach Oktoberfest & Music Jam Oct. 24. A portion of the proceeds from the sale of her album will benefit veterans.

Shelley Koppel
For Veteran Voice
STUART – Singer JessLee records in Nashville these days, but she often returns to the Treasure Coast. Her grandparents, Sal and Roger Rossi, who spent their professional lives as musicians, still live in Palm City. The Martin County High School graduate released her debut album, “Just a Kiss,” in April.
The singer/songwriter will appear Oct. 24 during the annual Oktoberfest at the Indian River fairgrounds, and she recently announced that beginning Oct. 24, she will donate $2 from the sale of each album to the Combat Veterans Association, a national organization, or to local chapters of the Combat Veterans Motorcycle Association.
In a phone interview, JessLee spoke about her career plans and why veterans mean so much to her.
To Read More Subscribe Here