Golden Knights to drop in at Stuart Air Show 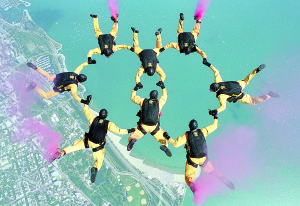 Photo courtesy of the US Army
The Golden Knights perform a formation jump 10,000 feet over Hakimpt Air Force Station. The parachuting competition was part of the Military World Games in Hyderabad, India. The demonstration and competition parachute team is part of the United States Army.

Patrick McCallister
For Veteran Voice
The U.S. Army Parachute Team is dropping in at the 2015 Stuart Air Show. The team is better known as the “Golden Knights.”
“We’re really excited about them,” Elisabeth Glynn, executive director of the air show, said. “They’re the world’s most elite parachute team.”
The Stuart Air Show is ramping up the excitement on Friday, Oct. 30, 5 to 10 p.m.
“We have a really beautiful night show,” Glynn said.
The night features the Dirty Flight Suit Party. The name comes from the tradition of performers showing up in their dirty flight suits. The party has all the trimmings — dinner, chances to meet the performers, and premium seats to watch the inaugural show. Tickets are $90.
“There’s also general admission for people who just want to throw down a blanket, get hot dogs and beer, and watch the night show and fireworks,” Glynn said.