Aboard the Honor Flight: One memorable trip 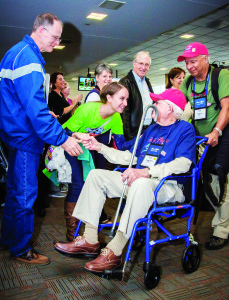 Photo by Phil Galdys
World War II Army veteran Vincent Koch is pushed by his guardian, Army veteran Dan Aguilar, Palm City, as he shakes hands with an enthusiastic member of the Honor Flight Ground Crew and greeted by others during his arrival in Washington, D.C., Oct. 24 on the Southeast Florida Honor Flight.

Mary Kemper and Phil Galdys
Veteran Voice
(Editor’s note: Army veteran Phil Galdys is director of operations for Veteran Voice and Your Voice News & Views. He was invited to accompany Southeast Florida Honor Flight on its Oct. 24 trip to Washington, D.C. Here, he shares his impressions with Veteran Voice.)

By now, everyone knows about the Honor Flights conducted nationwide. They transport World War II veterans — and increasingly veterans from later wars — to Washington, D.C., to visit national war memorials and attend a Changing of the Guard at Arlington National Cemetery.
If you speak to anyone lucky enough to be part of an Honor Flight, they tend to be fairly low-key in their expectations of what it will be like.
Afterward, they’re changed forever. Phil Galdys is no exception.
Galdys walked Veteran Voice through the whole, jam-packed, emotional day.
“I only got about four hours of sleep the night before, waking at 2:30 a.m.,” he said. “I arrived at the (West Palm Beach) airport at 4 a.m.”
To Read More Subscribe Here