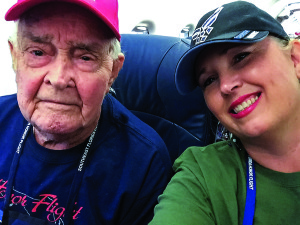 Mary Kemper
Staff Writer
On Dec. 14, the small Planet Vero Radio studio in Vero Beach was packed to its legal capacity — five people — one of whom was the star of the show about to be recorded.
Ralph Nathan Oko, the host of the “Our Veterans Voice” show, was excited at the chance of interviewing World War II veteran William “Bill” Bryant, who served in the Army Air Corps and then the Air Force.
“This is history, irreplaceable history,” he had said beforehand.
Bryant’s son, William Bryant Jr., came along as well to help his Dad tell his story, and producer Cindy Schwarz handled the sound board, as well as contributing to the conversation.
Bryant Sr., who speaks with a musical Virginia accent, had been interviewed by Oko before, and covered the years between the time he enlisted — just before Pearl Harbor — to 1943, in that broadcast. He was a radioman on a bomber crew, stationed for a while at Guadalcanal, in the Pacific. His skills would one day lead to the clandestine world of espionage.
To Read More Subscribe Here