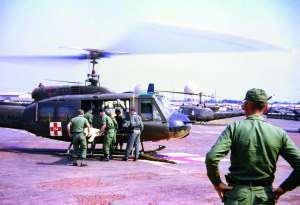 Photo courtesy of Dr. James Harrell
Veteran Dr. James Harrell will be at the Peter & Julie Cummings Library on Wednesday, Jan. 27, 10:30 a.m. to noon, to present Medical Care in Vietnam, a lecture accompanied by photos he took when there in 1967. The photos he’ll show are appropriate for all ages.

Patrick McCallister
For Veteran Voice
A driver loses control of his car on an Interstate and it flips. Within minutes a helicopter is on scene airlifting him to a trauma center. His survival was likely decided during the Korean and Vietnam wars when military doctors learned much about medical evacuation and put it into practice.
Dr. James Harrell was a trauma doctor in Vietnam in 1967. He said doctors couldn’t save everybody, but they had all they needed to try in every case.
“The system was set up so good, we were never in a position in that emergency room that we had to say, ‘We can’t take care of that, move onto him,’” he said.
Harrell will be at the Peter & Julie Cummings Library to present Medical Care in Vietnam on Wednesday, Jan. 27. In addition to talking, Harrell — a confessed shutterbug — will have photos to show from his time with the 25th Infantry Division and later the 65th Combat Engineers.
To Read More Subscribe Here