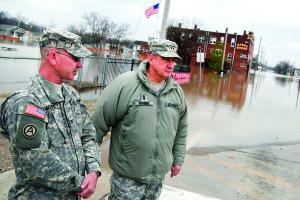 For Veteran Voice
At least 625 National Guard soldiers and airmen are on duty as several southern and central states fight heavy floods triggered by rain and runoff.
In response to historic flooding in some areas of Missouri, Gov. Jay Nixon mobilized the Missouri National Guard to protect local communities and support emergency response personnel.
The human toll so far: At least 20 people have died over several days in Missouri and Illinois, the Associated Press reported.
States of emergency have been declared in these states: Georgia, Texas, New Mexico, Missouri, Arkansas, Oklahoma, Illinois, Louisiana and Missouri, according to data from the National Guard Bureau.
By far, Missouri had the most guard personnel on duty, with about 515, according to NGB figures.
To Read More Subscribe Here