Wings of Freedom landing in Stuart 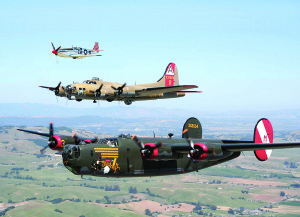 Photo courtesy of the Collings Foundation
The Collings Foundation’s Wings of Freedom tour featuring three World War II aircraft will touch down at the Martin County Airport/Witham Field on Friday, Jan. 15, and stay until Sunday. Then it’ll head to Melbourne for four days.

Patrick McCallister
For Veteran Voice
The Collings Foundation’s Wings of Freedom is touching down in Stuart Friday Jan. 15 to Sunday, Jan. 17. It’ll head to Melbourne Jan. 18 to 21. Hunter Chaney, director of marketing, said the veteran-rich Treasure and Space coasts are a great place to kick off the annual history exhibit tour.
“We’re looking forward to it,” he said. “Every year it’s exciting to kick off in Florida, and Stuart is our first stop on our 27th annual tour.”
The exhibit of three World War II aircraft includes not just the opportunity to look inside, but to fly in them, too.
“The heavy bombers, what’s neat is we have two, the B-17 (Flying Fortress) and B-24 (Liberator),” Chaney said. “The half-hour (flight) is $450.”
Then there’s the lady, and what a lady she is. Betty Jane is a North American TP-51C Mustang. It’s the last of the duel-control Mustangs flying anywhere. Half hour and full hour flights in it are $2,200 and $3,200. Chaney said among Betty Jane’s nicknames is “Marital Argument.” Seems some couples have animated discussions about one wanting to put out $2,200 to $3,200 for an airplane ride. But, for those dollars folks get some flight instruction and stick time, too.
To Read More Subscribe Here