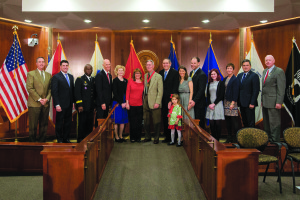 Patrick McCallister
For Veteran Voice
The Florida Veterans Hall of Fame Council is taking nominations for the 2016 class until the end of May. The hall, founded by the Florida Legislature, is in its fourth year. The inaugural year was 2013 with a class of six. There are now 19 members, including Gov. Lawton Chiles who was inducted last year.
Nominations go to Colleen Krepstekies, cabinet and legislative director at the Florida Department of Veterans Affairs for the committee, which will meet in the summer to consider them.
“First, a gentle reminder, it’s not a military hall of fame,” Krepstekies said.
In other words the committee isn’t looking to honor outstanding military careers. It’s seeking to honor veterans who’ve made outstanding contributions to their communities in any number of areas from advancing the sciences and social programs to notable business achievements after serving in the military.