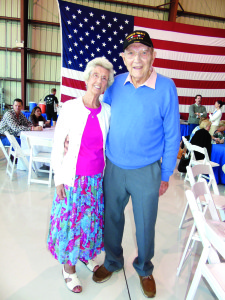 Mary Kemper
Staff Writer
By now, everyone knows about Southeast Florida Honor Flight.
It’s one of hundreds of organizations around the country that takes World War II veterans on a whirlwind visit to Washington, D.C., for one last chance to visit memorials in our nation’s capital that honor their service.
It’s always a heck of a day for these guys.
But it takes quite a bit of money to make it happen. That’s why on Jan. 16, Southeast Honor Flight and the Stuart Air Show held a special fundraiser to raise the necessary cash to make sure all veterans get their chance of a lifetime.
Earlier in the day, a 5K Run Run was held. (Editor’s note: Please see last week’s coverage by writer and participant Patrick McCallister.)
The evening, though, was set aside for a special catered dinner, and USO show, just for the veterans, family, friends and interested public, that was not only to raise funds, but to pay tribute to our Greatest Generation veterans.
To Read More Subscribe Here