Two Marines finally get their due 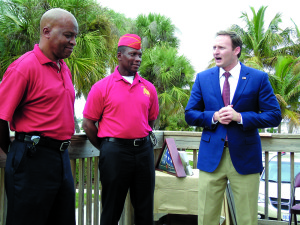 Staff photo by Mary Kemper
U.S. Rep. Patrick Murphy congratulates former Marine Gunnery Sgt. Calvin Floyd, left, and former Marine Staff Sgt. Nate Wells, at a ceremony recognizing their official retirement from the Marine Corps, which had been delayed for both of them due to bureaucratic delays.

Mary Kemper
Staff Writer
Combined, two Marines served a total of 40 years — but it wasn’t until Jan. 31 that they finally got their official retirement ceremony from the Corps.
U.S. Rep. Patrick Murphy, D-18, was the keynote guest at the ceremony held at his office in Stuart for former Staff Sgt. Nathaniel “Nate” Wells and former Gunnery Sgt. Calvin Floyd.
Members of both Marines’ families were on hand to watch as the two men received flags flown in their honor at the U.S. Capitol, along with official certificates.
The event represented the culmination of several years’ hard work by one of the Marines’ colleagues, retired Gunnery Sgt. Reid Hollander, who organized the ceremony and served as its presenter.
Hollander, on discovering that the two men never received their retirement due, had set about to remedy the situation.
To Read More Subscribe Here