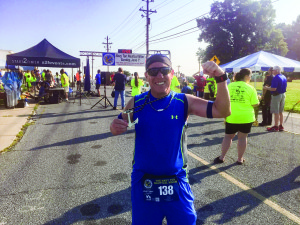 Photo courtesy of Ed Burrows
Stuart Navy veteran Ed Burrows is among runners signed up for The Marathon of the Treasure Coast, which will have events ranging from a 5K to marathon March 5 and 6 starting from Memorial Park, 300 S.E. Ocean Blvd. Stuart. Burrows started running a mile a day in 2009 to handle personal issues. Since then he’s graduated to doing half marathons, 13.1 miles. The race he’s proudest of is the Navy Ten Nautical Miler, hosted by the Morale, Welfare and Recreation Department Naval Support Activity Mid-South – Millington, TN. Ten nautical miles is 11.5 five miles, or 18.52 kilometers.

Patrick McCallister
For Veteran Voice
On Sunday, Feb. 21, the Chasing Caterpillars Triathlon launches at Sailfish Splash Waterpark, in Stuart. Among the racers is Port St. Lucie’s Chris Bertorelli, who’s always game for a triathlon. The Marine Corps Force Recon veteran is a triathlon coach.
“For me, it’s because of the charity they give to,” he said.
That charity is the Treasure Coast Down Syndrome Awareness Group. Bertorelli’s niece, Roma Comfort, has the pervasive developmental disorder. He said she teaches him about courage and tenacity needed to be a Marine and triathlete.
“People say, ‘You’re a Marine’ — they say, ‘You’re tough,’” Bertorelli told Veteran Voice last year. “They say, ‘You were Recon; you’re tough.’ These kids have challenges, physical challenges and developmental challenges, every day of their lives and they go through it with smiles.”