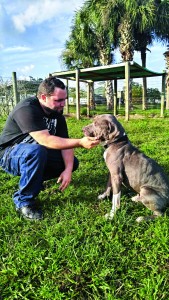 Photo courtesy of Alicia Cheplick
Combat veteran David Merrill doesn’t know what he’d do without Recon, his service dog, with whom he connected through Courage on All Fronts.

Mary Kemper
Staff Writer
There’s war, and there’s the aftermath of war. Today, with apologies to William Shakespeare, I’d like to celebrate the dogs of war.
From almost the beginning of recorded wars, dogs have been with us every step of the way, and they continue to be. There is no greater bond on Earth than the one forged between troops and their four-legged buddies.
We’re all familiar with military and law-enforcement K-9s, who are highly trained to detect explosives, drugs, take down attackers and the like. These dogs have saved countless lives.
There are the dogs of World War I and II, who helped retrieve the wounded, carry medicines and ran scout and sentry duties.
There are the dogs behind the scenes in war — stray pooches “adopted” in combat, loved by troops for providing a tiny oasis of affection in war’s chaos.
There are the ongoing struggles of former K-9 handlers to adopt their partners and bring them home.
There are the monuments to those brave dogs who, after saving lives, lost their own.
And then there are the dogs who take care of our veterans when they come home, wounded in body and spirit.
All this they do for us, and more — asking nothing but some food and their companions’ love.