Ride for Heroes slated for Sunday 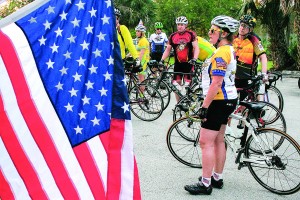 Staff photo by Patrick McCallister
Riders ready for a previous Riding for Heroes, a four-route bicycle ride fundraiser for the veterans-assistance organization Justin’s Wings. The annual ride will be on Sunday, March 20.

Patrick McCallister
For Veteran Voice
Hundreds of Florida cyclists are spinning up for the fifth annual Riding for Heroes, which benefits the Lance Cpl. Justin J. Wilson (US Marines) Memorial Foundation, a Palm City veterans- and military-family assistance organization that goes by the shorthand “Justin’s Wings.” Starting this year riders’ entry fees will do more for area veterans and military families.
At its last regular meeting — Tuesday, March 8 — the Martin County Commission adopted a policy that, among other things, eliminates fees for memorial events for people county parks are named after.
There’s only park and event now covered by the new policy —the fundraising ride based at the Lance Cpl. Justin Wilson Memorial Park, 2050 S.W. Mapp Road, Palm City. Justin Wilson, who moved to Palm City shortly before enlisting in the Marines, died in an IED attack on March 22, 2010, in Helmand Province, Afghanistan, while serving in support of Operation Enduring Freedom, OEF. He’d just turned 24.