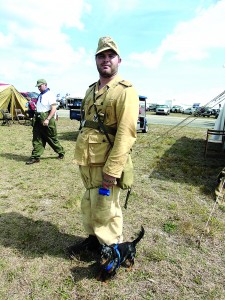 Mary Kemper
Staff Writer
The 39th annual Tico Warbird Air Show was jam-packed with thrilling shows and displays March 11-13 to crowds of tens of thousands in Titusville.
For the first year, a special evening show was presented, with aerial performances and a fireworks display.
The Friday show featured an Air Force F-16, F-18 Super Hornet and Soviet-era MIG fighter demonstrations.
Additionally, the show welcomed the appearance of “Fifi,” the world’s only still-flying B29 bomber aircraft.
In addition to the Friday flights, on Saturday they presented an F86 Sabre, two B25 bombers, a P51 fighter and a World War I-era Fokker Triplane and Sopwith Camel, among many others.
Airplanes of many different decades were available to explore, with their histories explained by Valiant Air Command volunteers, including the massive KC-135 Stratotanker and the A10 Thunderbolt II, that saw service in Desert Storm.
Helicopter flights were presented by a UH1H “Huey” and AH1 Cobra.
An hour before the aerial demonstrations each day, the flightline was open to allow guests to see the performing aircraft up close.
To Read More Subscribe Here