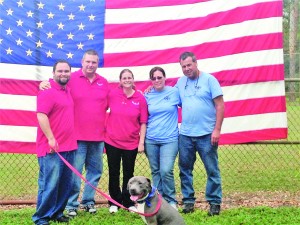 Photo courtesy of Courage on All Fronts
David Merrill, far left, is a Marine Corps veteran with post-traumatic stress disorder. He’s getting a service dog from Courage on All Fronts, founded by Michael and Alicia Cheplick, beside him. Courage on All Fronts recently got a $10,000 donation from the LCpl Justin J. Wilson (US Marines) Memorial Foundation. That organization, better known as Justin’s Wings, was founded by Fran and Lance Wilson. That donation is getting Recon, front, trained to help Merrill handle everyday stresses that can trigger PTSD responses.

Patrick McCallister
For Veteran Voice
What started as a donation from one organization to another has become a relationship between one mother and another with the strongest of ties to the Marine Corps. One had a son who died in combat. The other a husband who came home.
Both started organizations to help veterans and military families.
“I saw a mom who was trying to breathe and hold on to what she had of her child,” Alicia Cheplick, president of Courage on All Fronts, said. “I don’t think anyone can fully understand (the loss of a child) except for someone who’s been there.”
Alicia and her husband, Michael Cheplick, founded Courage on All Fronts a few years ago. Michael served in operations Enduring and Iraqi Freedom.
On Tuesday, March 22, Fran and Lance Wilson, parents of Lance Corporal Justin Wilson, gave Alicia a $10,000 check to help continue Courage on All Fronts’ service-dog program. The program is pairing up veterans with post-traumatic stress disorder with service dogs to help them manage daily living. The Wilson’s gave Courage on All Fronts the donation on the sixth anniversary of their son’s death.