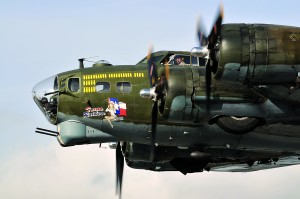 Photo courtesy Nancy Kwiecien
The Boeing B-17 Flying Fortress was a four-engine heavy bomber aircraft developed in the 1930s for the United States Army Air Corps. Competing against Douglas and Martin for a contract to build 200 bombers, the Boeing entry outperformed both competitors and exceeded the air corps’ expectations.

FOR VETERAN VOICE
The Commemorative Air Force B-17 Texas Raiders arrived at Fort Pierce March 28.
Kicking off her 2016 flying season with a classic three-day “barnstorming” visit, the Flying Fortress was open to the public for tours and flights beginning Monday afternoon at 1 p.m.
Upon arrival, Texas Raiders was open to the public for cockpit tours, hosted by her crew. Her first flight of the day commenced at 5:30 p.m.
Texas Raiders, owned by the Commemorative Air Force, is one of just nine B-17s currently flying in the world today, and has undergone eight years of extensive restoration at a cost of more than $600,000 to bring her into flying condition.
It’s the first visit to Fort Pierce and the St. Lucie County Airport for the Flying Fortress, which tours all across the United States on a mission to educate the public about vintage military aircraft and their role in U.S. history.
For more information, visit www.B17TexasRaiders.org.