You’ve got to see this hidden gem 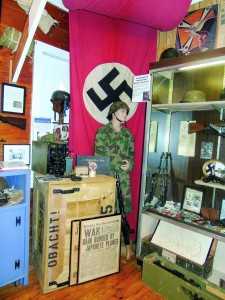 Staff photo by Mary Kemper
A Nazi flag captured from Adolf Hitler’s retreat at Berchtesgaden, Germany, can be seen in the Germany section of the Road to Victory Museum in Stuart.

Mary Kemper
Staff Writer
A good many people know about the Road to Victory Museum in Stuart — but a good many more need to find out about this nugget of history gold nestled beside the Martin County Water Authority.
The museum is open Saturdays from 10 a.m.-2 p.m., though it can also open during the week by appointment.
On this particular Saturday, Karl Lehtola, an Army veteran of the Vietnam War, greets visitors with a smile and stands ready to share his sizable store of military history knowledge.
Even the museum’s building is a piece of history, he says.
“This building comes from Camp Murphy, which is now Jonathan Dickinson State Park,” located between Hobe Sound and Tequesta, he says. “It’s a former barracks.”
Its original wooden walls and floor, bathroom fixtures and kitchen appliances instantly takes a person back in time, a perfect setting for the numerous artifacts on display. From the outside, a first-time visitor would never imagine how much is contained in so modest a structure.