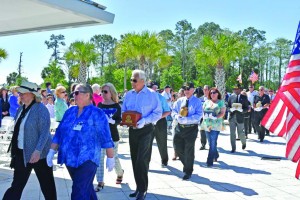 Photo courtesy of Missing in America Project
Volunteers carry the cremated remains of 13 veterans and five spouses during an interment ceremony at the South Florida National Cemetery on Saturday, April 9. The Missing in America Project seeks out uninterred remains of veterans, spouses and dependents to find next of kin to claim them, or for burial at national cemeteries.

Patrick McCallister
For Veteran Voice
Yeoman 2nd Class Mary Josephine Quinn Frank was among the about 10,000 women service members sent to Europe during World War 1. She died in 1981.
Then, sadly, her cremated remains awaited burial for more than three decades. On Saturday, April 9, the Missing in American Project laid Frank to rest with 12 of her fellow military veterans at the South Florida National Cemetery, Lake Worth.
“It was a woman from World War I — we don’t see a lot of those,” director Kirk Leopard said. “I imagine there were not a whole lot of them.”
In addition to the 13 veterans, Missing in America interred the remains of five spouses at the national cemetery during the ceremony.
Kathy Church, Florida state coordinator for Missing in America, said the little known group has an unusual purpose.
“Our mission is to locate, identify and inter the unclaimed cremated remains of veterans, spouses and dependents in funeral homes, hospital basements and medical examiners offices,” she said.
To Read More Subscribe Here