Hats off to our heroes 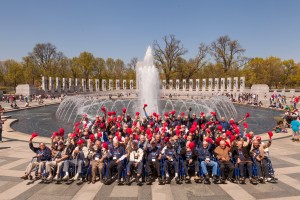 Mary Kemper
Staff Writer
Eighty-three World War II veterans took a trip of a lifetime April 16 aboard their Southeast Florida Honor Flight to visit monuments at Washington, D.C.
Their day began early — it was necessary to be at Palm Beach International Airport between 5:30 and 6 a.m. to check in — and ended late, around 9 p.m.
In between was a whirlwind of activity, all meant to honor the heroes of World War II and to thank them for helping to save freedom.