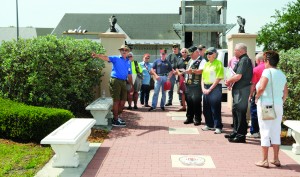 Photo by Roger Scruggs
Veteran Bill Kowalczyk, of the Brevard Veterans Memorial Center, takes a party to view the Center’s plaza, and explains his plans to add new exhibits in upcoming weeks at a media event April 30 to give the public an update on its expansion project. In the background, construction on the Center’s new Museum wing can be seen, including a tower designed to match similar towers emplaced all along the Florida coast during World War II.

Mary Kemper
Staff Writer
It was a proud day April 30 for members of the Brevard Veterans Memorial Center’s Expansion Committee, as it hosted a media day to show off progress on its multi-million-dollar upgrades.
Committee Chairman Donn Weaver, along with Center President Bill Vagianos, gave a briefing to more than 60 members of the media and public on just how impressive the efforts are to date.
Parking has already been revamped, and will continue to grow larger as the work goes on. But it’s the building and grounds that are the big stars.
Spearheaded by Ivey’s Construction, the main contractor, the building’s new wing dwarfs the original building. All of the BVMC Museum’s exhibits will move there into a large, airy space — 6,000 square feet — with a landing almost completely circumnavigating the entire space. This will allow for a complete redesign.
To Read More Subscribe Here
We use cookies to ensure that we give you the best experience on our website. If you continue to use this site we will assume that you are happy with it.OkPrivacy policy