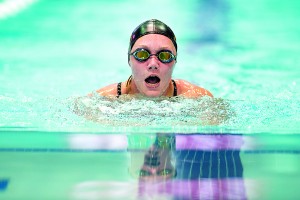 Photo by E.J. Hersom
Army Reservist Chasity Kuczer swims breaststroke during the 2015 Department of Defense Warrior Games in Manassas, Va. June 27, 2015. The swimming event portion of the games was held at the Freedom Aquatic and Fitness Center in Manassas.

For Veteran Voice
Former Army Reserve Spc. Chasity Kuczer set records at the 2015 Department of Defense Warrior Games, as the first-ever female gold medalist in archery and the highest individual scorer ever in the coed competition.
She helped her Army team earn gold in the team competition as well. She also earned gold medals in the women’s seated discus throw and discus in track and field and gold medals in team swimming and a silver medal for the backstroke.
Now a medically retired Army veteran, Kuczer hopes to continue her streak in archery for Team America at the 2016 Invictus Games which ended May 12 at the ESPN Wide World of Sports Complex at Walt Disney World in Orlando.
To Read More Subscribe Here