In tribute to Theodore ‘Ted’ Wilson 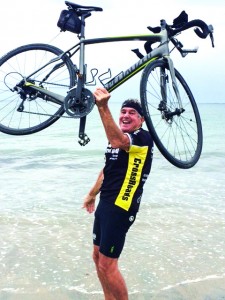 Photo courtesy of the Wilson family
Veteran Voice founding publisher Ted Wilson completed the rigorous Ride Across America, taking him from the Pacific to Atlantic oceans when in his 60s. Following a cycling tradition, he’s pictured holding up his bicycle after a first-accomplishment ride. Wilson recently died of cancer-related complications.

Mary Kemper
Staff Writer
It’s an honor and privilege to pay tribute to Theodore “Ted” Wilson, a partner in Your Voice News & Views and publisher of Veteran Voice, having worked with him for more than two years. He passed away on April 28 after a valiant fight against cancer. He was more than just a boss.
An accountant by profession, Ted called himself a “numbers cruncher,” but he had many talents. Together with his colleagues Sharon Elkins and Steve Erlanger, he took the plunge into publishing — and excelled.