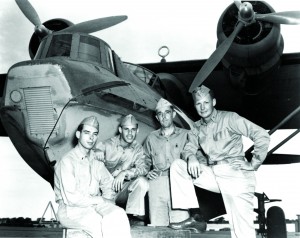 Source: Wikimedia Commons
The U.S. Navy pilots of the four Consolidated PBY-5A Catalinas of Patrol Squadron 24 (VP-24) and VP-51 that flew the torpedo attack mission against the Japanese fleet’s Midway Occupation Force during the night of 3-4 June 1942. Pictured, from left: Lt. (jg) Douglas C. Davis, of VP-24; Ensign Allan Rothenberg, of VP-51; Lt. William L. Richards, Executive Officer of Patrol Squadron 44 (VP-44), who flew in a VP-24 aircraft on this mission; and Ensign Gaylord D. Propst, of VP-24. Richards hit the Japanese oil tanker Akebono Maru, flying PBY “24-P-12”. This was the only successful air-launched torpedo attack by the U.S. during the entire Battle of Midway.

Mary Kemper
Staff Writer
We’re coming up on the 74th anniversary of World War II’s Battle of Midway — June 3-6.
There’s really no way to put words to what a “momentous victory” it was, to quote Pacific Fleet Commander Adm. Chester Nimitz. But those are as good words as any.
It was only 6 months after Pearl Harbor. Our country was caught flat-footed, and there’s no denying it. To stand up against Japan at that point was suicidal, thanks to the crippling loss of so many ships.
We went into it anyway. We had to. We lost a lot of brave guys. In a way, it was our Battle of Britain.
We won. The tide slowly, but surely, turned. It came at a terrible cost.
In those days, when the Empire of Japan was about to take over half the world, we were desperate to beat these fanatical monsters back – even if we didn’t quite know what we were doing at first.
But we learned fast, at Midway.