Music to this veteran’s ears 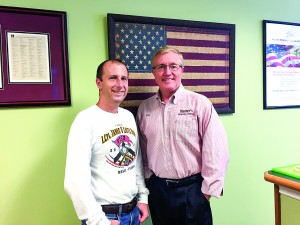 Photo by Patrick McCallister
Army veteran Nicholas “Nick” Savasta has severe hearing loss. The Operation Iraqi Freedom veteran got hearing aids from the Starkey Hearing Foundation by way of Mutter’s Precision Hearing Center in St. Lucie West. Savasta lost his hearing in combat. Among other things, he was twice hit by IEDs.

Patrick McCallister
For Veteran Voice
The military can be hard on the ears on a good day. Army veteran Nicholas “Nick” Savasta had bad days, too. The Operation Iraqi Freedom veteran left a lot of his hearing back in a warzone. On Wednesday, June 1, Savasta got it back.
His sixth-grade daughter was with Savasta. Joe Mutter, owner of Mutter’s Precision Hearing Center, asked her a simple question. When she answered, Savasta cried.
“That’s the first time I’ve heard her voice,” he offered in explanation.
Savasta didn’t have to explain. He’d just received a pair of hearing aids donated by the Starkey Hearing Foundation.