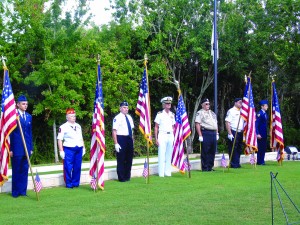 Mary Kemper
Staff Writer
Forecasted rain held off long enough for the people of St. Lucie County to observe Memorial Day ceremonies May 30 at Veterans Memorial Park, Port St. Lucie.
On hand was a crowd of more than 300 veterans, family, friends and the public.
The event was hosted by members of the United Veterans of St. Lucie County, including Vietnam Veterans of America Chapter 566 and the Jack Ivy Detachment of the Marine Corps League.
The keynote speaker was Air Force Col. Julie Stola, who is attached to the 45th Medical Group, 45th Space Wing, Patrick Air Force Base.
Stola became a registered nurse in 1986 and served in the Peace Corps before joining the Air Force. She rose to command the 45th Medical Group in 2014.
Drawing on her many experiences traveling around the world, she stressed the need “for everyone, everywhere, always to remember the sacrifices that brought us the life we enjoy today.”