The aristocrat who helped save America 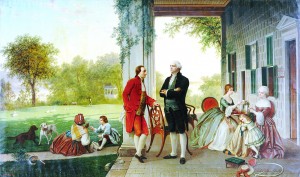 Source: Wikimedia Commons
In this painting by Thomas Prichard Rossiter in 1784, the Marquis de Lafayette is pictured with George Washington at Washington’s home at Mount Vernon, Virginia.

Mary Kemper
Staff Writer
When he was born Sept. 6, 1757 in Chavignac, France, he was christened with the imposing moniker Marie-Joseph Paul Yves Roch Gilbert du Motier, Marquis de Lafayette — but later, as a warrior in service to the fledgling United States, he was simply known as “Lafayette.”
The young nobleman grew up in extreme wealth and privilege as the son of a wealthy landowner. Following tradition, he was commissioned as an Army officer at the tender age of 13.
His dad was killed in battle that year during the Seven Years War, and his mother and grandfather both died in 1770, leaving Lafayette with a vast inheritance. He joined the Royal Army the following year, and in 1773, just 16, he married 14-year-old Marie Adrienne Françoise de Noailles, a member of another prominent French family.