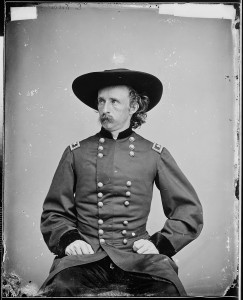 Photo supplied by
Brady National
Photographic
Art Gallery
This photo of ill-fated Army Gen. George A. Custer was taken sometime between 1860 and 1865, while Custer was serving in the Civil War.

Mary Kemper
Staff Writer
When the news flew over the telegraph on June 25, 1876, no one could believe it. In fact, many newspapers recorded it as yet another glorious victory for the storied and dashing Gen. George Armstrong Custer.
In fact, it was a disaster of the first magnitude. Lakota and Cheyenne warriors wiped out an entire battalion of the 7th Cavalry Division, Custer along with it.
The Battle of the Little Big Horn happened just at the time America was celebrating its Centennial. For many, it was an optimistic time — new lands were opening up for settlement, the two coasts were joined by a transcontinental railroad, a new gold supply had been found in the Black Hills of Dakota Territory, and the sky seemed the limit to what Americans could achieve.
White Americans, that is. The Native Americans had a different view.
To Read More Subscribe Here