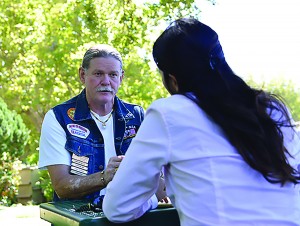 Patrick McCallister
For Veteran Voice
Hepatitis C can be cured. The Department of Veteran Affairs’ Veterans Health Administration is reaching out to diagnosed veterans to get in to get cured.
“Over the last two years, maybe three, there have been some pretty amazing drugs that have come out on the market,” Nick Beckey, chief of pharmacy service at the West Palm Beach VA Medical Center said.
The center sent letters to known affected veterans earlier this month. The letter says that since 2014 the center has treated more than 530 veterans with hepatitis C with a 90 to 95 percent cure rate. Fewer than 10 stopped treatments due to side effects.
“All of these drugs are very tolerable,” Beckey said.
That’s important, because previous treatments with lower success rates — 30 to 60 percent — were hard to take. Firstly, they were painful injections. Secondly, they caused severe flu-like symptoms. The injections seemed like a case of the treatment being worse than the disease.
To Read More Subscribe Here