Battle on an unimaginable scale 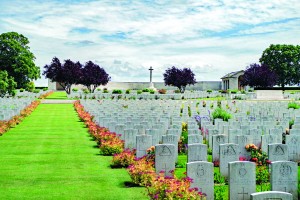 Photo by Gary Dee
The Serre Cemetery in Somme, France, is the last resting place of tens of thousands of soldiers who lost their lives in the bloodiest battle of World War I.

Mary Kemper
Staff Writer
In the “war to end all wars,” it should have been the battle to end all battles.
Sadly, it was only the beginning of bloodshed beyond anything that had come before — except for the American Civil War.
The Battle of the Somme began on July 1, 1916, and ended in November. More than 1 million men lost their lives.
On July 1 alone, 57,000 British, Canadian and other Commonwealth soldiers were killed.
That’s an entire mid-size town. On one single day.
Why? How?
Part of the answer lies in the fact that World War I was a war of technology wedded to outdated tactics. So many new weapons were developed by then — but no one updated the 19th-century “each side lines up and slugs it out” tactic. Trench warfare was just more of the same.