Seminole Wars and the algae problem 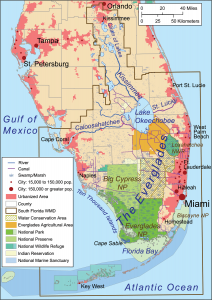 Photo courtesy of Florida Land and Improvement Company
Hamilton Disston purchased about four million acres of Central and South Florida in 1881 with plans to dry and sell the land. The purchase included Shingle Creek, in Orlando, Lake Okeechobee and the Everglades. Shingle Creek is the northernmost headwater sending water south to Lake Okeechobee, which feeds the Everglades.

Patrick McCallister
For Veteran Voice
It’s all over Florida news — freshwater blue-green algae is washing up on Martin County beaches. Interestingly, the Seminole Wars played a role. Back in the 1877 a fella named Hamilton Disston — a Union Army volunteer from Pennsylvania — visited Florida and looked over military surveying records from the wars that wrapped up in the late 1850s.
The Army was trying to figure out where the impetuous Seminoles were heading during South Florida’s annual floods, so it had extensive topographical maps. What the maps told Disston is that it was possible to dry out much of the state.
More about Disston in a moment.
Put a finger on an Orlando map at Sand Lake Road and South John Young Parkway. That’s pretty much where the blue-green algae problems on the Treasure Coast begin, according to Marty Baum, executive director of Indian Riverkeeper. He’s a Vietnam-era Navy submariner. More accurately, the about 100 miles and 135 years of development between south Orlando and Lake Okeechobee are where the problems begin.
“It all begins in the 1880s with Hamilton Disston,” Baum said.
To Read More Subscribe Here