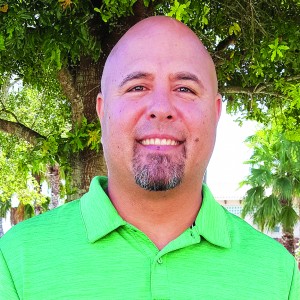 Photos courtesy of Frank Sakuma (left) and Michelle Gentile (right)
Navy veteran Frank Sakuma is at the forefront of a battle to save Florida’s waterways. He’s the chief operating officer of the Indian River Lagoon Council. The Indian River, Martin County, is famously filled with blue-green algae, the photo (above right) shows the algae crisis at the Central Marine in Stuart. Just a few months ago brown tide caused a marine-life die off in Brevard County. Sakuma’s job isn’t to try to fix immediate symptoms to the estuary but rather to stop these events from happening.

Patrick McCallister
For Veteran Voice
Frank Sakuma did his time in the Navy decades ago. Now he’s at ground zero of a battle Florida has to win — the fight to reverse more than a century of damage to the Indian River Lagoon that stretches from Martin to Volusia counties. Sakuma said his Navy days taught him a no non-sense approach to tackling big problems. Sakuma is the chief operating officer of the Indian River Lagoon Council.
“There’s nothing we can’t work through,” he said. “We simply don’t have another choice.”
Right now, the lagoon’s big problems are obvious. There’s toxic blue-green algae, cyanobacteria, in the southern end of the lagoon, Martin County, likely coming from Lake Okeechobee discharges into the St. Lucie River.
The blue-green algae did something highly unusual and unheard of among local water experts. The freshwater bacteria migrated into the ocean to wash up on Bathtub, Stuart and Jensen beaches. The migration was along freshwater streams pushed into the Atlantic by water volume driven by a heavy rain season in South Florida.
To Read More Subscribe Here