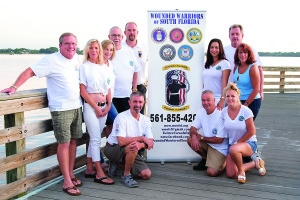 Patrick McCallister
For Veteran Voice
On Aug. 20, the Bonito Blast will be fishing not only for our Florida veterans, but also with them, thanks to the efforts of Captain Billy Black and Mike Durkee, veteran of Afghanistan and Iraq and executive director for Wounded Warriors of South Florida (WWOSF). Together they will bring veterans on board to compete for the largest bonito and $2,500 prize money.
Wounded Warriors of South Florida is a nonprofit veteran’s organization and not affiliated with other similar organization. Working closely with the Veteran’s Administration, they screen for eligible post 9/11 veterans in financial crisis. In 2015, they proudly donated approximately 90 percent of their funds to veterans and their families.
To Read More Subscribe Here