So much owed to so few 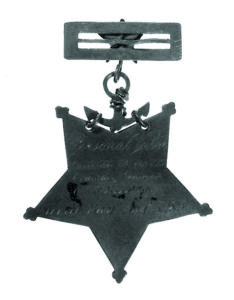 Photo courtesy of U.S. Naval History & Heritage Command
This Medal of Honor was awarded to Navy Civil War veteran Seaman Samuel Davis for ‘extreme courage’ while acting as a torpedo lookout aboard the USS Brooklyn during the Battle of Mobile Bay, Aug. 5, 1864.

Mary Kemper
Staff Writer
The Medal of Honor is not an award given lightly. Throughout our history, it has only been given for things that no one would ever do … normally.
When someone throws himself on a grenade to stop his brothers from being killed — when someone captures enough enemies so that his unit wins the day. These are the kinds of things for which the Medal of Honor is given.
We’re a young country, and the Medal of Honor is young as well. It was in the Civil War that the Medal of Honor was born. It is still, and will always be, the highest honor we can award.
Ordinary Americans, doing extraordinary things.
On Aug. 5, 1864, Rear Admiral Farragut — remember him? “Damn the torpedoes, full speed ahead”? — took his squadron of 18 ships, including four Monitors, against the heavy Confederate defenses of Mobile Bay, Alabama. Soon after 6 a.m., the Union ships crossed the bar and moved into the bay. The monitors Tecumseh, Manhattan, Winnebago, and Chickasaw formed a column to starboard of the wooden ships in order to take most of the fire from Fort Morgan, Ala., which they had to pass at close range.
But it was an ordinary seaman, Samuel Davis, who received the highest honor.