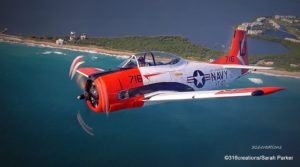 Bad guys don’t get to see Navy SEALs parachuting in, but folks at the Stuart Air Show will. Among this year’s offerings will be the Leap Frogs, the U.S. Navy Parachute Team.
“This is the 27th year of the airshow,” Susan Cunnane, director of development and events, said. “It’s the largest event on the Treasure Coast.”
The Leap Frogs, the Navy Parachute Team, is made up of active-duty members of Naval Special Warfare, including the storied SEALs whose earliest ancestors trained in Fort Pierce during World War II. Fitting then that the airshow will have World War II battle re-enactments with an unusual addition.
To Read More Subscribe Here