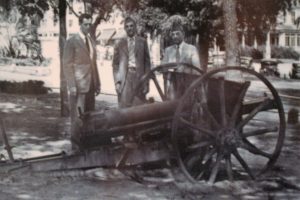 Image courtesy of the Florida Historic Capitol Museum
A German field artillery piece captured during the Great War was on the grounds of the Florida Capitol until 1942. It was melted down to help the next great war effort: World War II. Pictured from left to right with the artillery piece are former governor LeRoy Collins along with the American Legion’s James Hamlin and R.A. Gray, Florida’s secretary of state. About 42,000 Floridians served in World War I. 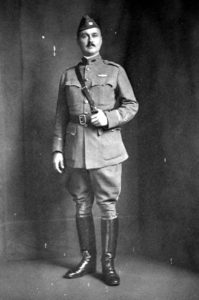 Image courtesy of the State Library & Archives of Florida
John B. Stetson Jr., son of the famous hat maker and part-time DeLand resident, served at a pilot and trainer in the Army’s Aviation Section, U.S. Signal Corps, the earliest predecessor to the Air Force. Stetson went to France during the Great War.

By Patrick McCallister
For Veteran Voice
It was 100 years ago that the nation and Florida were debating entering the Great War. The debate ended on April 6, 1917 with Congress declaring war on the German Empire. A remnant of the war remains — Veterans Day, which started at Armistice Day in 1919.

On Jan. 26 the Florida Historic Capitol Museum is opening an exhibit to educate folks about the state’s roles in that war: Over Here and Over There: The United States, Florida and World War I. The exhibit will continue to May 21.

“With the centennial coming up it’s a great opportunity for us to look at a war that has been overshadowed by World War II,” Michelle Sunset, exhibits manager at the museum, said.