To the Shores of Tripoli – Marine Corps Hymn’s intriguing evolution 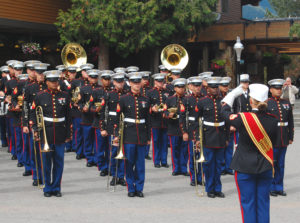 Mary Kemper
Staff Writer
mkemper@veteranvoiceweekly.com
No one knows exactly who penned the lyrics of the Marine Corps Hymn — legend has it that a young Marine fighting in the Mexican War wrote them sometime in 1947.

But the origins go all the way back to the Battle of Derne, Libya (known as Tripoli) in 1805.

After a 600-mile march, the forces of Marine Gen. William Eaton and his adjutant, Lt. Presley N. O’Bannon successfully fought against enemy Arabs, who had supported piracy on the Barbary Coast ever since the Crusades centuries earlier.

The Barbary Coast encompasses the north African countries Morocco, Algeria, Tunisia and Libya, and the name is a derivation of the Berber Coast, named for the Berber tribes that inhabited the region.