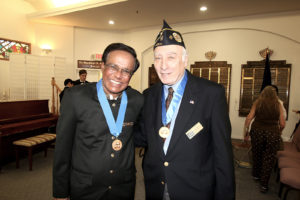 Photo by Wendy Dwyer
Right, Chapel of the Four Chaplains board of directors member Larry Wapnick of Vero Beach stands with
Dr. Shamsher Singh, a Port St. Lucie physician, who was the recipient of the prestigious Chapel of the Four
Chaplains Legion of Honor Gold Medal, awarded to him for his selfless service in the community Feb. 5 at
Temple Beth El Israel Synagogue, Port St. Lucie.

It truly was a day to remember.

On Feb. 5, at Temple Beth El Israel Synagogue in Port St. Lucie, a man known and loved throughout the community was given a very prestigious award — and no one deserved it more.

The Four Chaplains Award was inspired by the actions of four Army chaplains, representing different faiths, in World War II.

On the fateful night of Feb. 3, 1943, the USAT Dorchester, carrying just over 900 troops, steamed toward Europe. A German U-Boat fired a torpedo, striking the ship below the water line, and she sank in just 18 minutes.

Wounded and panicked soldiers were everywhere. Without regard to race or religion, the four first lieutenants organized the escape to topside, calmed the panicked ones, helped the wounded to the upper deck and handed out life jackets. When those ran out, the chaplains gave their own away.

The Four Chaplains were Rabbi Alexander Goode of the Jewish faith; Father John Washington, a Roman Catholic priest; the Rev. Clark Poling of the Dutch Reformed faith; and the Rev. George Fox, a World War I veteran and Methodist minister.

These men knew each other already from Army Chaplains School at Harvard University, and were good friends. Each knew they faced danger wherever they went, but each felt bound to serve God and their fellow troops in any way that was asked of them.

Witnesses who saw the four chaplains singing and praying together, arm in arm, as the ship went down, said it was something that would stay with them for the rest of their lives.

It’s that spirit that inspired the forming of the Four Chaplains Foundation, and the subsequent medals given around the country to those who serve their community without regard to race, creed or religion.

Dr. Singh exemplifies that service to the highest degree. He has given all his energy and a good deal of his own money to the Honor Flight, having been a guardian for veterans for more than a decade.

He’s hard to miss on Honor Flights, in his colorful and patriotic outfits and his ready smile. No veteran escapes his notice, and he stays in touch with them constantly.

But that’s not all he does.

The ceremony Feb. 5 was well attended, with upwards of 300 coming out to celebrate Dr. Singh.

The Treasure Coast High School JROTC provided the Color Guard, and they were a poised group.

The Lincoln Park Academy, Fort Pierce, provided music by its orchestra and chorus, under the direction of George Rahming.

I can tell you — when they sang the national anthem, this callous and jaded journalist shed more than one tear. It was absolutely one of the most beautiful renditions ever. The same with “America the Beautiful.” It is still ringing in my ears.

In the words of Mayor Greg Oravec, they “knocked it out of the park.”

Each clergyman lit a candle of remembrance for each of the four chaplains.

Veteran Larry Wapnick, a board member of the Chapel of the Four Chaplains, made a special reference to Coast Guard Steward’s Mate First Class Charles W. David Jr., a black sailor aboard the cutter USCG Comanche.

“Did he rescue all those white men because they were easier to see in the water? No,” Wapnick said. “He rescued them because he was a fellow human being.”

Wapnick attended the dedication of the Coast Guard Cutter Charles David Jr, in 2013, which is homeported in Key West.

None other than the CEO of the Chapel of the Four Chaplains in Philadelphia, retired Navy Capt. Louis Cavaliere, made the award presentation.

“It is my privilege and honor to present this award to you, sir. You have given so much to your community, and you truly represent ‘interfaith in action,’” he said.

“You have done so much with your own ‘lifejacket.’ You’ve taken that ‘lifejacket’ and done some extraordinary things. Let us all follow your example.

Dr. Singh, a modest man, chose not to make any remarks — but he really didn’t have to. His actions have spoken louder than any words.

After the ceremony, he was mobbed by well-wishers. It was lovely to see.

And in this day and age of divided politics, it was a breath of fresh air to honor someone who is clearly all about everyone in the community, and not just one “side.”

Congratulations and thank you, sir. I feel a better person for have shared in your well-deserved award.