Gold Star family gets a makeover 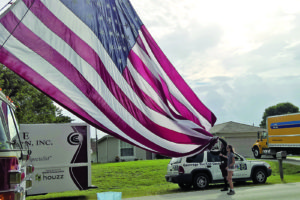 Staff photo by
Patrick
McCallister
AJ Young, a
drummer with the St. Lucie County Fire District’s
Honor Guard, and Ryli Reback, prepare a large American flag to honor Gold Star parents Clay and Linda Schumann.
Believe With Me, a Palm Beach County group,
organized a complete
renovation of the couple’s home, along with getting them a new car.

Patrick McCallister
For Veteran Voice
ort St. Lucie home. He attended St. Lucie West Centennial High School and joined the Army after graduating in 2006. He got married and was expecting his first child.
Two comrades and he were killed by a roadside bomb on July 7, 2011, in Paktika province, Afghanistan, while serving in support of Operation Enduring Freedom. Schumann received the Purple Heart posthumously.
Fitting then that his parents, Clay and Linda Schumann, saw their completely renovated home on Purple Heart Day, Aug. 7. It’s the home Jordan grew up in. It’d fallen into some disrepair in recent years.
The couple didn’t just see the renovated home that Sunday afternoon — they saw it for the first time accompanied by dozens of well-wishers cheering, the St. Lucie County Fire District’s Honor Guard playing “Amazing Grace” on bagpipes and drums, and a mammoth American flag. 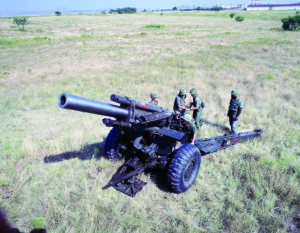 Source: Department of Defense
An M114 155-mm howitzer is shown in firing position at an undisclosed location in 1985. This type of big gun was key to winning the Battle of Bloody Ridge, which took place from Aug. 18 to Sept. 5, 1951, near the 38th Parallel in Korea.

Mary Kemper
Staff Writer
I like to visit “This Week in Military History” websites, and I found an item on one of them that struck a chord — it involved a very special veteran in my life.
He served in all three major wars — World War II, Korea and Vietnam — and only about one single battle would he speak, and that was the Battle of Bloody Ridge in Korea.
He was my Dad, retired Army Col. Keith C. Nusbaum. He passed away in 2013 after enjoying a long, well-earned retirement. But like so many veterans, he never spoke about his wartime experiences — except for Bloody Ridge.
It was his first combat.
As a freshly minted West Point graduate in June of 1945, his first assignment was in the Army of Occupation in Japan. He didn’t like the duty, evidently, which was all he’d say.